A dress of a thousand days 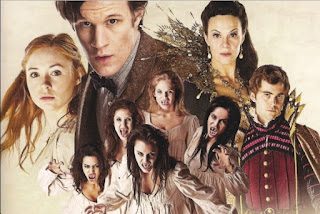 … Well, eleven-hundred-and-three to be precise, but then the title wouldn't be as interesting.

I want to tell a story of a dress. This isn’t a story about the woman wearing the dress. The dress is considered inanimate and therefore won’t get your sympathy or kind words: It is a passive observer. It’s not really inanimate of course. The dress came from idea’s and aspirations and hope — is there anyone who can say that idea’s and hope aren’t fluid or alive? Yet, most people don’t see this, but that’s okay, the dress doesn’t want sympathy or kind words. Just as it know’s the woman, also in this story, wouldn’t want them either. When it was merely ideas and paper, the dress patiently waited to see what would happen, with the same anticipation of its maker. From its humble beginnings when it was just cloth and thread it watched.

Where did this dress start? It started in a gift; a present of the future. The dress had a human - a woman - who it wanted to follow. This woman had a friend.  These friends, grew-up from children, in a world that seemed certain to tell them that their idea’s where silly and they should conform. Despite, the world acting against them, they both grew up to be quirky and independent-minded women. These women didn’t… no wouldn’t, conform to societies rules and even when they were forced to conform, their acts of protest were still there, executed subversively. Their friendship survived the space of years and the move of continents, until eventually they were able to come back together and it was like nothing had changed. As summer ended, the woman - whose life was full of the daily chores of a grown up, but whose head was full of half-acted-on idea’s - was brought a gift by her oldest best friend: A ticket. A chance to meet a Doctor; the one that had taught them both it was okay to be different.

The woman had a family, the most important of whom was her son. The woman’s little boy was just as quirky as her — perhaps even more so. The woman was able to conform to societies whims when she needed to, but her son couldn’t, or perhaps subconsciously wouldn’t; society is after-all full of silliness. Society confused him, but only because he perhaps understood society a little too well and didn’t want to be a part of it. Noise and smells and colours were sometimes too much; he couldn’t understand how people could be so blinkered to everything around him. How could people be so deaf and blind? He wanted to meet the Doctor too, but his Mother only had one ticket and she knew that the crowds would be too much for him to cope — so much so, that not even a visit to  the Doctor who she was seeing could cure him. That was okay, he didn’t want to be cured, he did however want to be a part of the visit. He wanted his Mother to wear something special for him and the Doctor and he wanted to choose.

He did… a giant medieval fish woman from space called Rosanna Calvierri. Umm…

The woman hadn’t realized, but her childish idea that, “I can do anything” had been tarnished by the adult life she had spent her time avoiding. The optimism and belief that nothing in the world could stop her, had somehow left her and she responded to her son, “I think you are over-estimating my craft skills”. Her Mother’s (perhaps magical, probably haunted) sewing-machine, that her Father had given her when her Mother had died, still sat in the corner. Occasionally, pulled out to sew a small bag for her son’s trinkets, or to hem the leg of her Husband’s trousers, but nothing more. The sewing machine looked sadly on, but the dress wouldn’t give up hope. It captured all of its might into the idea of itself. Over the next couple of days, thoughts, idea’s and plan’s sprouted in the woman’s mind and her response of, “I think you are over-estimating me” changed to, “why can’t I?” The dress had done it. No longer a wishful idea it was now becoming real.

With the help of her friends — starting with the lady (and some may say she is as kind as a GodMother), who lent the woman a dressmakers dummy, to those friends who said kind words when they saw how the dress was growing (through the magical plane called ‘FaceBook’), the dress became more real.

Patterns and guides from another magical world called ‘Google’ helped the woman turn the cloth  and wire she had found on ethereal realm of ‘Amazon’ into something special. For three weeks, the woman planned and drew and cut and sewed the cloth. The woman spent all the gold she had on buttons and pearls. Now, the dress knew that it wasn’t perhaps the best made dress in the world. Some of it’s seams were wonky and some of it’s pleats were not fully aligned but it didn’t matter. The dress knew it was loved and wished for; from the boy who couldn’t go to see the Doctor but wanted to be there anyway, to the Mother who had borrowed her son’s naivety, that anything was possible. The dress was alive and happy and nearly complete, until…

The woman received a call from her sister. Her Father was very ill. The woman rushed to him, and found her Father in a deep sleep. she waited for days by his bed in the hope that he would wake and she could tell him how much she loved him but, he never woke up from his sleep and he died. The woman was numb with devastation. The woman couldn’t think, her mind too full of grief to do anything but sit. The dress felt saddened when the woman cut a large piece of its material from its leftover pile and walked away from it. It had come so far to be abandoned.

The dress looked on from the corner of the room as the woman sat, for the next four weeks, in a chair. A needle and coloured thread by her side. The dress saw the woman, sew a leaf onto the fabric every time the woman shed a tear for her father; a leaf to remind her that on the day she went to see him, the tree’s where in late summer green, but on the day she left him for the last time, the leaves of the tree’s had turned golden and the leaves were falling as if the tree’s were also crying. The dress watched, untouched, as the woman continued to sew more leaves onto the fabric. She stopped being numb and the number of leaves increased as the tears fell.

The day the woman was to visit her friend and the Doctor was quickly approaching. The dress still untouched began to panic. Had the woman become so overcome with sadness that her promise to her son would be forgotten? On the day before the woman left to go to the big city, she turned to her dress and carefully sewed the panel of falling leaves onto the front of the skirt. The dress saw that not only had the woman sewed hundreds of leaves but also a phrase, ‘Fortis abores. Autumnus lacrimas’: ‘Strong trees. Autumn tears’. The dress understood. The woman wasn’t lost in grief, she was turning her tears into strength. She was reminding herself that when we go through the darkest days, we come out stronger. The dress knew it was now complete.

The woman travelled to the city and eventually she put on the dress as she travelled to the place where the Doctor would be. The dress gained many strange stares, but it didn’t mind. When the woman laughed as the small children hid, or when people stopped to take pictures, the dress laughed too.

At one point, the woman’s friend left her alone for a while whilst she went to see an evil mistress - although the woman and her friend actually thought she wasn’t evil just quirky like them. As the woman waited she saw some men walk past, but the woman was older than she used to be and wasn’t wearing her glasses, (medieval fish people don’t you know) and couldn’t see who they were. One of the men, stopped and stared then asked her for a photo. He then announced that he had written the story from which the idea of dress had been taken. The story-smith - or writer as he would like to be called but that's not very fairy tale -  (Toby Whithouse) stood before her. The woman was astonished that someone as important as this would notice the dress. The dress wasn’t astonished. It knew the journey to its creation, and could see why it was important. The woman began to realize that her childish idea’s that she could do anything, weren’t that childish after-all.

The woman, visited the Doctor who was so kind to her, he even held her parasol and then she went to visit the market. The dress saw, how after meeting the story-smith, her confidence had increased. The calls for photo’s and cries of appreciation were now something she could delight in, not be nervous about. The dress knew it had done it’s work well.

The day was drawing to an end and the woman was tired and happy; the happiest she had been for a long time. Just as she was about to leave the marketplace, another man came up to her, asking about the dress. He announced that he had initially created the dress of the evil-space-fish and he admired how well the woman had made it. The woman tried to hide the tatty hems and the bad hand-sewing, but the costumer (Ray Holman) didn't mind. The dress could see that the woman was now full of confidence and that it was a confidence that would last a long time. The dress knew it was special; it knew that it could unite old friends, make people believe in themselves, prove to children that people keep promises, make people smile and that it could mend shattered hearts.

When the woman finally managed to get home to her Son and family, the dress hid in its covering, content for what it had achieved. The woman, spent the day in the arms of her Son who was proud of her, and they sat together examining the treats she had brought from the market. The next day, when her Son had gone to school, the woman pulled out the dress from the covering. She looked at it and smiled. She carefully removed the embroidered panel that reminded her of her Father. After re-hemming the seams and hems, she washed it carefully. After she had hung it out to dry and would smile every time she saw the dress, remembering the events of the time in the city. The dress glowed with pride in itself and what it could achieve. Eventually the woman placed the dress back in its cover and placed it into the wardrobe. The dress sighed knowing what it had seen in it’s thousand days. It knew that soon - because of what it had managed in those months - that it soon would be joined by a friend.
Posted by Katie Kift at 11:49 AM 0 comments