So what's the Swedish for "The redeeming race"? 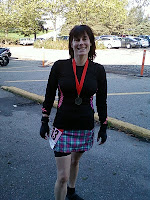 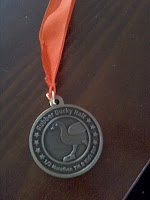 So my last race was a disaster. I think we can safely say that in the realms of "what not to do.." in a race situation, I pretty much hit every button.
So, when the dust has settled (metaphorically speaking; I don't think I was going quick enough to leave any dust in my wake), what do you do? Well, most people will look at their training schedule. Contemplate their mistakes. Evaluate their performance. Come up with a plan that will be worked on and tested ad infinitum until it's perfect. Me? I am NOT most people. I think about 90% of the worlds population are now kneeling and thanking some form of deity at this comment. I mean a world of people like me? Imagine the chaos. Okay, it would be fun chaos, but still...
So, what do I do? I register for another trail half on a moments notice and make a mental note to remember to take the rice-krispy squares to the race start. Yep, in another Britney Spears, "Oops I did it again" moment I have gone and done my usual trick. I did a late registration to a race I haven't trained for. At least in this instance I can say that I was sober. Remind me? Being sober when you register for a race is a good thing, right?
The race in question is on Sunday. It's a trail half-marathon, around Burnaby lake. The beauty of this race is that there are NO mountains and the trail is well maintained. Gravelly, but well maintained.
So why? It was only a couple of weeks ago I ran my first trail half marathon; a race that pretty much kicked my arse. Why do I want to go ahead and do it again? The reason is very serious and profound. The race is called "The Rubber Ducky". I mean, come on people, how cool is that! (Oh, it's also cheap).
So in light of my previous race performance I have decided to come up with a plan. Admittedly it's a very short plan; the race is in 4 days!. With this plan I hope to undo the (very brief) melancholy I suffered from the last race. Re-establish myself as a "tootler"; I am not a runner - runners are too serious. I also need to reverse my poor standing in the Minimalist running community. Oh, I have just realised; I have no standing in the Minimalist running community - I am ultimately known for being the resident drunk. That role can be done sitting, or lying, or in fact if it's a good night, hovering over the toilet bowl.
Anyway, getting back on topic; here it is, my 20 point check-list for success:
1) Little funny minimal shoes - preferably the pink ones... they are SOOOO cute
2) Ensure double helpings of food the night before. Fuel is essential. Beer can be counted as fuel, right?
3) Have a lie in
4) Eat extra bowl of cheerios
5) Wear the brightest running skirt I own; maybe if I frighten the competition enough they won't run
6) Pack the Rice-krispy squares - pre-race food of the "running gods"
7) Take extra packets of "swedish fish" - the snack of the "running gods"
8) Remember the wine-iskiate - the drink of the "running gods".. okay I should stop with that "running gods" thing
9) Don't carry your old big running shoes - what mad idea was that?
10) Don't forget a "rocking" playlist on the ipod. BTW, ideas are always welcome
11) Airdrums
12) Remember to say the rude parts of the songs then blame it on the music when the old ladies stare
13) Smile
14) Burp
15) Smile again; that burp was awesome!
16) Ensure an accurate inventory of all the runners bums. All runners should be attributed scores for the level of "TMI"
17) Take a big rubber duck on the run with you
18) If there are race photo's remember to show the "rubber duck" - if they don't see your face, they won't know how badly you are running
19) When things get tough use the age-old mantra; "skip like a fairy, skip like a fairy"
20) Bacon sandwiches - fatty, cholesterol laden food is always a good incentive to get to the finish quickly
I think that's a comprehensive list on what is needed to run a successful trail half-marathon. I have also registered "D" for the kids race, which takes place after my race. So I have the extra incentive. I have to run the race in less than 3 hours otherwise there will be a forlorn 5 year old, stranded at the race start, wondering if the resident coyote's have eaten Mummy. I also think, in an effort to win the prestigious "Mummy of the Year" award, that the 20 point plan above should be limited, in his case, to point 17 and none of the others. I mean, I have to scrape some "brownie-points" back somehow!
Posted by Katie Kift at 3:05 PM 5 comments 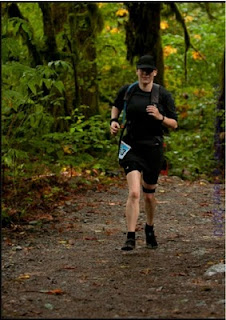 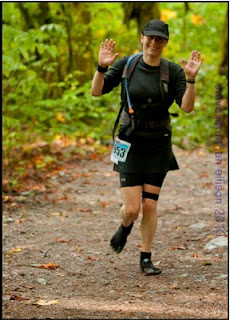 After the really depressing post earlier, we deserve a laugh.
Here are the Photo's from the '5 Peaks' Half Marathon at Buntzen Lake which took place last month.
Go on, have a giggle, you know you want to.
(All I can think of, is that I have really scrawny legs!) 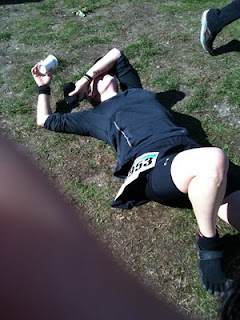 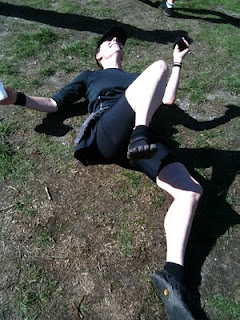 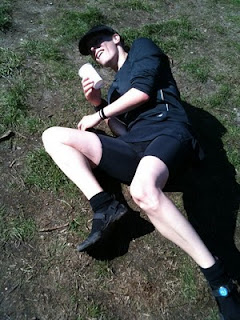 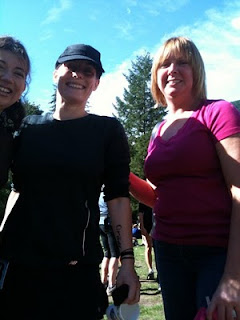 In a running Funk...

Yep, it's official. I am in a "running funk" To be fair, I have been for a while and I know the cause. This doesn't make it easier to get out of it. I just haven't got the inclination to run at the moment. I try, but as soon as I try to get motivation to pull out my skirt, my heart backs down and I slink off to find something else to do. This isn't good. (I had a lousy race last week and I am meant to be running 2 ultra's next year).
I love running. I love getting out there; seeing the nature and smelling the air. It's my head clearer. However, something else has made my "running passion" taper off quicker than the weekly milage before an Ultra. I know what it is and I think I am only really just realising how much of an effect it is having on me.
The reason. My mother. She died about 5 months ago and since then my inclination to run has dried up more effectively than a mountain creek in summer. I know this is grief, and I know at some point this will get better, but I want to know when. How do I get my arse into gear and push myself to get onto those trails and get muddy.
The ironic thing is that this is not what she would have wanted. I know this; yet my body aches and my heart is sore and I just don't feel I have the energy to get the stinky bits of rubber onto my feet and get out there.
So how do I solve this? I honestly don't know. I don't want to run alone. Perhaps I don't want to be left alone to think; yet this is really my only option. I am starting to join a running club and I think that will help, but it is only once a week. I am trying to drag friends out to run, but they have this absurd thought that I am a good runner, (which I am not), so they always decline. No matter how much I try and persuade them, I can't find anyone willing to run with me. Perhaps I should check the smell from my armpits before asking!
So come on guys? Honestly I am asking here! How the hell do I get out of this "running funk"? How do I get my "mojo" back? Because frankly I hate this!
Posted by Katie Kift at 4:42 PM 4 comments